Bubbl was founded by the retired DISD police chief and a group of partners with safety, security at is core.

The rise of services providing rides isn’t stopping anytime soon, and a former top law officer and his partners have founded a safer shuttle service for Dallas area residents.

“The name Bubbl represents the notion that each time a customer steps into our vehicle they will be bubble wrapped in safety and security.”

“The name Bubbl represents the notion that each time a customer steps into our vehicle they will be bubble wrapped in safety and security,” Miller said in a press release. “Having a police officer as a driver reinforces this idea, while giving them instant credibility and providing peace of mind.”

The shuttle service officially launched Aug. 22. Customers can schedule rides on the website, Bubbl-Dallas.com, or through the app, when it launches later this fall.

Julie Burns, a spokesperson for the service, said that it only made sense for these police officers to continue serving their communities. 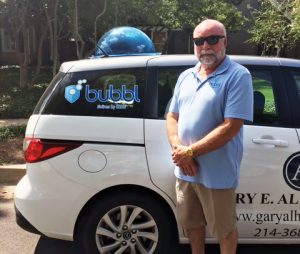 “With Craig Miller’s background, it made sense to partner with off duty and retired law enforcement,” Burns said. “Bubbl is able to support its local community by providing safe rides for local families as well as employment for local officers.”

If parents want to know where their kids are while they are en route to school, they have the ability to track them through the website.

“Most of them [the founders] live in the area where Bubbl provides services,” Burns said. “They wanted to create a safe and secure transportation option that could benefit their own families and realized that many families were also interested.”

Although the police officers won’t be wearing their uniforms or enforce laws while they are driving, safety is their biggest concern and priority.

“Transportation companies have increased over the last five years and we are starting to see an increase in legal action against these organizations regarding driver misconduct. We wanted to provide a shuttle service that is, above all else, safe and one that our community can depend on,” Adams said in the press release.

Bubbl said it owns and insures all of its vehicles.

Parents, would you let your kid ride an Uber or Lyft by themselves?